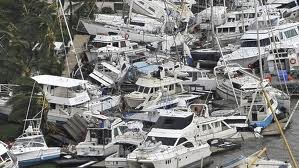 Naturally the Chicken Littles of the climate scare industry are blaming the use of carbon fuels for Typhoon Haiyan.

There is nothing unusual about typhoons in the Eastern Pacific. In 1274, Japan was saved from invasion by Kublai Khan when a typhoon destroyed a huge Mongol invasion fleet. A second bigger fleet in 1281 was destroyed by another typhoon which was named Kamikaze or “divine wind” by the grateful Japanese. Typhoons were also frequent and severe during the Little Ice Age around 1670.

Nowhere in the world are cyclones, hurricanes, typhoons or tornadoes powered by the tiny trace of well-dispersed, invisible carbon dioxide in the atmosphere.

Anyone who studies storms can observe that the energy of tropical storms comes from localised heat and moisture. Thunderheads are not composed of carbon dioxide – they are composed of water in its various forms. Water is unique in the atmosphere in that it can change phase from a gas, to a liquid, or a solid all within the temperature ranges found on Earth’s surface. Every phase change generates or absorbs considerable energy. It is these latent energies of evaporation and condensation that sustain storms.

Storms form in areas of sun-heated low pressure where there is a plentiful supply of warm moist air over the sea, and masses of cooler high-pressure air over the nearby land. A mega-storm grows as air rushes from areas of high pressure to areas of low pressure. It starts spinning because of the rotation of the earth. This low-pressure vortex is maintained by the release of latent heat as moisture in the rising air condenses into rain and hail.

Carbon dioxide plays no part in any of these storm processes. Moreover, average land and sea temperature has not risen for 16 years; nor has the frequency or intensity of destructive storms.

Continuing to argue that a carbon tax is required to prevent typhoons and cyclones is just nonsense. Using this mad logic, it would make more sense to have a “hydrogen tax” on emissions of steam and water vapour (H2O) in an equally futile attempt to remove the real driving energy from tropical mega-storms