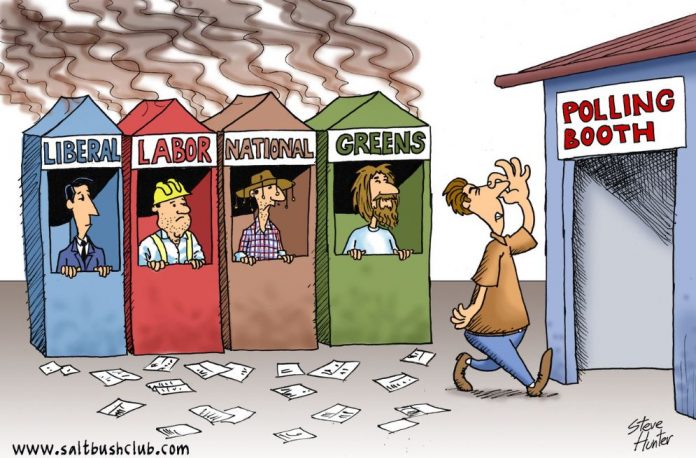 The Liberals cannot be trusted to control Australia without adult supervision. But to replace them with an ALP/Green/ABC/Teal government would be a disaster. So voters must ensure that Liberals can form the next government, providing they have mature overseers.

Voters must ensure there are new sensible people holding the balance of power in Australian parliaments. We need people who understand that:

·       The “Man-made Climate Crisis” is a fraud. Natural cycles control the climate.

·       Hydrogen, Pumped Hydro and Big Batteries are all net-consumers of energy. They can store energy and recycle it, but that round-robin process is always a net consumer of energy.

·       Carbon Capture and Storage and “Clean Coal” are con games designed to consume more hydro-carbon energy for no public or environmental benefit. They would enrich big businesses.

·       While the world scrambles to get coal supplies, Australian bureaucrats have delayed coal exploration and development for decades. And we can mine and export uranium, but not use it. These follies must stop.

·       All electricity generators should be treated equally – no special taxes or subsidies. They should be obliged to provide their own backup power and their own connections to the grid.

·       Electric cars may suit rich city folk (who forget they are powered mainly by coal). But battery-electric engines are an impossible dream for dozers, tractors, harvesters, road trains, aeroplanes and bulk carriers. The supply chains that deliver daily food, fuel and services to the cities rely totally on hydrocarbon energy (diesel, petrol and gas).

·       To moderate the effects of droughts and floods we need MORE DAMS NOW.

·       We need a regulatory firestorm to clear the legislative litter of green and red tape.

·       We have far too many complicated tax laws. We need to slash and simplify taxes everywhere, starting with abolition of payroll tax (the tax on jobs) and capital gains tax (the tax on capital improvements).

·       Most politicians since the Whitlam era have helped to create a huge national debt. Unless we reverse this, our currency will be destroyed, opening the door to digital money, electronic rationing and “The Great Green Reset”.

·       We must abolish federal/state/local duplication, leaving more control with State and Local authorities and with families.

·       The federal government should focus on defence, foreign affairs, quarantine and maintenance of free trade between states.

·       We need a “back-to-basics” in public education, with less green indoctrination.

·       Australia has a shortage of labour, and a surplus of people receiving welfare. Welfare for able-bodied recipients with no dependants should be reduced.

It is time to VOTE FOR REAL CHANGE. However, thoughtless rejection of the Lib/NP government will produce a government which is far worse – a Labor Government dependent on Greens and extreme Greens. We must use the power of preferential voting to break Liberal/Labor/Green Power.

Check out Topher Field on how to use Preferential Voting to get the best candidate elected:
https://www.youtube.com/watch?v=F88gVHaK3CM

Libs and ALP are both on the nose. It looks unlikely that either of them will hold a majority of seats. But if voters are not disciplined in how they vote, a bunch of deep greens posing as independents will grab enough seats to hold the balance of power. They will naturally support a radical Green/ALP coalition, and Australia will leap out of the frying pan into the fire.

However, with thoughtful and disciplined behaviour at the ballot box (for BOTH Senate and House of Reps) we can stop this green calamity with the help of sensible new politicians.

Our first election job – identify the worst candidates and parties. Preference them last on both House of Reps and Senate ballot papers when you vote.

The most dangerous candidates in this election are The Sneaky Greens – they pose as “independents” but are being supported by climate crazy millionaires and, if elected, will re-appear in their deep green uniforms. Unless you know better, put all “independents”, Teal Greens, Climate 200 and Get-Up supported candidates last.

Have a look here to see how they operate and what they plan:
https://www.climate200.com.au/
https://www.getup.org.au/

Then focus on who should get your top votes. Choose your numbers 1, 2, 3, 4 etc candidates from the Freedom-Friendly-Minor-Parties (FFMP) giving preference to whomever you like from the parties below:

·       Pauline Hanson, George Christensen and the One Nation Candidates

Put low numbers against all FFMP candidates so your vote preferences flow on and accumulate. Number every square all the way down to Unknown independents and the climate-crazy Teal “independents”.

For the Senate (which has a large complicated white ballot paper) it is safer and easier to number every square above the line, using the same party ranking rules as above.

Australia is facing a crisis. We hold a large rich continent with a small population. It is lightly defended with inadequate weapons. Wars are fought for living space and resources. To our north (and sneaking down to the East) are the teeming millions of Asia.

Australia has huge resources of minerals, energy, timber and food but too much is sterilised in nationalised parks, world heritage areas, or buried under rainbow serpents. We have to import farm labour while we pay Australians not to work. Now our grasslands and farms are being suffocated beneath subsidised green energy paraphernalia while speculators tout capital-destroying dreams like hydrogen.

Our education system devalues math and science, despises educational excellence and offers an expanding array of soft options. Our immigration policy seems to encourage racial tension while our military leaders seem more concerned with diversity and zero emissions than with discipline and skills.

It requires thoughtful dedication to save Australia at this late stage. It will get worse before it gets better. We cannot allow those who created this crisis to control our next chapter. Australia’s revival must start with this election.

WE STUFFED THAT ONE UP!