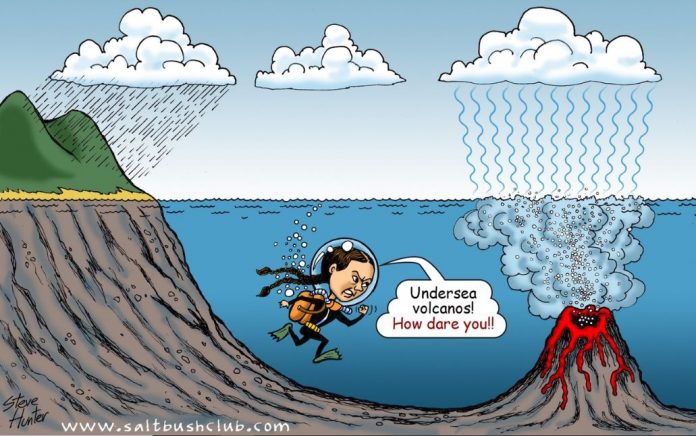 Despite Green/ABC propaganda, recent Australian floods were not caused by coal, cattle or cars. Weather is driven by winds; solar energy powers the winds and draws moisture for them from the oceans. These eternal natural rain-making processes have been aided recently by two extra factors.

Secondly, there is increased underwater volcanism in this region as evidenced by the volcanic eruptions near Vanuatu.

Earth’s climate history is written in the rocks. Anyone who cares to read that record will see that recurring Ice Ages, not global warming, pose the greatest threat to life on Earth. Even in today’s warm Holocene Era, the Little Ice Age was a time of war, famine and distress whereas the Medieval Warm Period heralded a time of peace and plenty.

Earth’s weather is driven by winds powered by convection currents which get most of their energy from the Sun.

Eastern Australia is currently under the influence a large La Nina event in the Pacific Ocean. These periodic ENSO (El Nino-Southern Oscillation) weather cycles are Earth’s most significant short-term weather events and have been identified in Earth’s climate as far back as 1525, well before the Model T Ford and the Watt steam engine.

The great El Nino of 1877-78 heralded China’s Great Famine, brought droughts to Brazil and caused failures of the Nile floods and the Indian monsoon. Even the Titanic was an El Nino casualty when it met an iceberg blown far south by El Nino winds.

Australia’s famous weather forecaster, Inigo Jones, was well aware of the natural cycles in climate as far back as 1923 – long before coal, cattle and cars could be blamed for “Global Warming”.

ENSO oscillations are not driven by atmospheric conditions or human activities – they react to the beat of a geological drum. ENSO timing and strength is largely determined by volcanic activity and the movement of tectonic plates, particularly along the Pacific Ring of Fire and the mid-ocean ridges splitting both the Pacific and Atlantic Oceans.

But largely hidden from view is another huge weather-maker – sub-sea volcanoes.

Right now, volcanic activity (mostly sub-oceanic) is melting parts of polar ice sheets as well as releasing volcanic dust and other natural gases into the oceans and atmosphere.

The warmed sea water expands, raising sea levels and increasing the evaporation which produces clouds and rain. Right now, the Tonga volcanic eruption is evaporating sea water that is probably adding to the record La Nina rains of Eastern Australia.

Man’s coal, cars and cattle are puny compared to what nature can do.

Hysterical children and political agitators keep bleating about “man-made global warming”. But climate history shows that the real danger to life on Earth is “global cooling” – a return of the great continental ice sheets creating a frigid zone north of a line from London to Chicago.

Russians and Alaskans know about frozen mammoth bodies in the ice, and understand this threat, but the western world continues to worship Saint Greta.

A bleak northern winter approaches. As blackouts beckon and the lights start to flicker, coal is suddenly OK again. But Europeans and Australians still plan a “Net Zero” ritual sacrifice of their farmers on the alarmist altar. None of this sacrifice will deter La Nina, or stop the volcanoes, or feed the people.

Someone should ask the new Green Government of Australia –

“If emissions of CO2 are the problem, why have we banned emissions-free nuclear power?”

Monster Hydrothermal Field Discovered in The Dark Depths of The East Pacific:
https://saltbushclub.com/2022/07/21/hydrothermal-discovered-in-east-pacific/

Viv Forbes is an Australian pastoralist who has spent a lifetime studying geology, weather cycles, climate and politics. 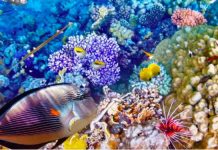 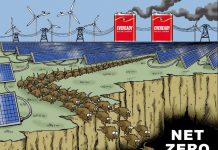 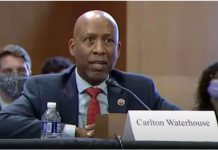