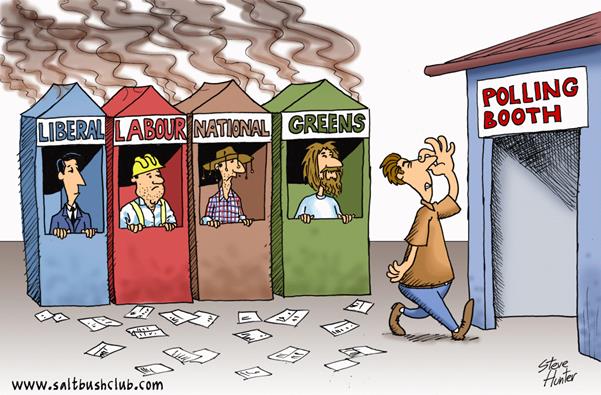 My political education started at home on the farm when I heard my father cursing Ben Chifley (who wanted to nationalise the banks), and cursing the unions (who refused to help our troops and stopped the coal mines and the wharves). But like Tony Abbott, Ben Chifley did protect our borders. And with help from the US navy, we stopped the boats in the Coral Sea. (We were ready to evacuate our farm and move south of the Brisbane Line.)

Ben Chifley was then replaced by Robert Menzies who created the Liberal Party. Rationing disappeared and Australians forgot politics and got on with life by producing things and having babies. The biggest threat to liberal “philosophy” came from the communists (the electorate of Bowen elected a Communist to the Queensland Parliament until 1949). It was an open obvious threat. (Now we have the devious red-greens, often the same people with similar goals, but smarter in hiding them.)

I went to University, studied geology, and got a vacation job with Rio Tinto at Rum Jungle in the Northern Territory. The first act of that company was to force me to join a union – that was the start of my dislike and distrust of unions and big companies.

I got my degree in Applied Science and immediately got a job as a government field mapping geologist. I then studied economics, English, meteorology and politics at night by correspondence, often under a mosquito net up north in the bush. One good thing came of my study of politics – I read five books that changed my life:

“The Conscience of a Conservative” by Barry Goldwater.
“Economics in One Lesson” by Henry Hazlitt.
“Fiat Money Inflation in France” by Andrew White.
“The Incredible Bread Machine” by Susan Love Brown.
“The Law” by Frederick Bastiat.

As a result I also joined the Liberal Party. My dalliance with the Liberals did not last long. I was surprised when, knowing nothing at all about my political beliefs, on my first attendance at a branch meeting I was offered the exalted post of branch secretary. I was shocked at their lack on enquiry as to who they were promoting and said no. I explained why to the branch chairman. I soon found that philosophy did not loom large in Liberal Party thinking.

Soon after that, Australia was shocked out of its post-war comfort zone when the baby–boomers elected Gough Whitlam. This pampered and spoilt generation has been damaging Australia’s political landscape ever since.

The electorate reaction to Gough was the election of Malcolm Fraser – the greatest political disappointment of my life. Fraser was a UN loving centralist who wasted the great opportunity that was laid at his feet.

So a few mavericks led by John Singleton and Bob Howard (both Saltbush Members now) formed a radical new free enterprise party – the Workers Party, and later the Progress Party. Judy and I joined them and devoted a huge effort here – I ran for the Senate three times, Judy was a (reluctant) state candidate. We ran election campaigns and wrote hundreds of letters, speeches and opinions. So we do have some knowledge of political processes and philosophy. But we promised no goodies, so never got elected.

Fraser was replaced by Bob Hawke, a Fabian socialist but one true to his colours, and followed by Keating. Keating boosted UN worship by signing Agenda 21 in 1992. (AG21 is a UN attempt to control Australian environmental laws and school curricula, and to transfer wealth and technology to 3rd world countries. It ignores individual human rights including private property rights.) The Hawke Government also introduced the capital gains tax.

So we free-enterprise mavericks battled on.

Ominously, those troublesome baby boomers backed Don Chip to form the ineffectual Democrats, who were later transformed into the insidious water-melon Greens. Those like Tony Abbott who got involved in student politics of their day saw the baby-boomer threat coming.

Then came the Howard era, and again Australians went to sleep, allowing Howard to plant the seeds of many current problems. He had a good careful treasurer who balanced the books (but did not repeal Hawke’s CGT). Howard was a Fabian who reassured everyone, scared no one, but went steadily in the wrong direction for too long. He clung to power by appeasing his enemies while betraying his supporters and his principles. He showed that democracy has a fatal flaw – you must buy votes with promises.

The only flickering candle in the long darkening era from Menzies to the present was Tony Abbott. The DLP were a consistent force for principled conservatism in these years.

The Good, the Bad and the Awful among Australia’s politicians:

Bad      – The LNP lite-weights such as Peacock, Hewson and Don Chip

And the worst Australian Government since WW2 – John Howard.

I am sure many will be surprised by my assessment of the Howard era. Howard was a consummate politician – he knew how to win and keep power without frightening the electorate, but had few political scruples or guiding principles. Property rights and freedom to trade were no obstacles to him. He introduced retrospective legislation, levied the fringe benefits tax on the wrong people because he was scared of the unions and invented the GST in a messy form to get Democrat support. He started the carbon wars by signing the Kyoto protocol and conspired with the states to steal property rights from farmers to achieve the Kyoto targets. He concentrated power in Canberra and ratified the UN handcuffs fashioned by Keating in AG21. Many great anti-industry “industries” were established or boosted on Howard’s watch. They were based on “saving” icons like the Great Barrier Reef, the Murray-Darling Basin, forests, wetlands and world heritage.

Howard also managed to disarm law-abiding Australians and then wastefully destroyed the thousands of confiscated small arms that Australia will surely need one day (I remember seeing pictures of British soldiers during WW2 training with broomsticks and then the British Home Guard being supplied with sporting rifles donated by private Americans.)

Whitlam would have done far more damage than Howard had he managed to stay in office, but Howard had more time to do more damage, slowly.

None-the-less the Green/ALP is our greatest danger.

As in every election we will be showered with promises on what free stuff we will get if we elect Party X. We already have far too much “free” stuff that costs far too much, and too many laws and regulations. More useful would be a Repeal Party that promised to reduce and repeal useless or destructive laws. We need the right to CIR – Citizen Initiated Repeal.

Every party and candidate should be assessed on just two questions:

2.    What useless or damaging laws, taxes, treaties, rules or regulations are you going to repeal? For starters let’s see the end of the Paris Climate Treaty, the green energy targets and feather-bedding, all open or hidden carbon taxes, the Murray-Darling Basin Plan, the Kyoto Land sterilisation and an end to membership and contributions to the International Panel on Climate Change. And an end to “death-by-delay” as an instrument of covert government policy.

On climate policy and electricity costs it is a matter of choosing the least-worst option, which in the House of Reps is the LNP.

The group that flaunts the best gift-wrapped promises and is better at hiding their real costs and threats, will win.

Demography is everything. The Green/ALP have won the baby-boomers with green fairy tales and “free” stuff and hope to win the Millennials with taxes to reduce the price of houses. But there is a rumour (denied) that Bill Shorten and his Union mates want a 40% inheritance tax on what the Nation-Builder Generation and Baby-Boomer Generation have managed to save over their lives. The Millennials hoped to inherit this bounty.

Threats of a new Death Duty could cause another generational electoral shift as the Millennials and their parents cause an electoral upheaval like the Baby Boomers did so long ago.

Firstly
Make sure LNP controls the House of Representatives so the Green-ALP cannot initiate any of their wild schemes for green energy, emissions targets, punitive taxes etc.

Secondly
Make sure neither the Green/ALP nor the LNP control the Senate so neither can pass energy/emissions legislation without the support of more sensible people in minor parties.

First, make sure you understand the preferential voting system, because the ALP, the Greens and Get-Up do understand it and will be using it. The safest bet is to number every square using the principle of giving No 1 to the least-worst candidate on offer.

NUMBER EVERY SQUARE.
For the Senate vote below the line and rank all candidates or at least 12. Make sure to go as far as the LNP so your vote is sure to be counted somewhere.

Put the Greens (and any “Independent” fellow travellers) last, so their expired votes can go nowhere. Better still do not vote for them at all. Put ALP just above them.

Select your choice of minor party or candidate for the top spot, especially in the Senate. Do not let ALP/Greens or LNP control the Senate.

I know of four well-informed Saltbush Club Members who are standing for election or campaigning heavily:

The existence of so many small right-wing parties show the extent of the deep concern about the leftward drift in the LNP. It has been going on for decades but only recently has become obvious to ordinary voters.

We need the LNP to win the House of Reps and put sufficient independent-minded people into the Senate to block any more Green/ALP/Lib carbon tax, emissions targets rot.

THE RETURN OF REAL MONEY—IS IT JUST IN TIME?