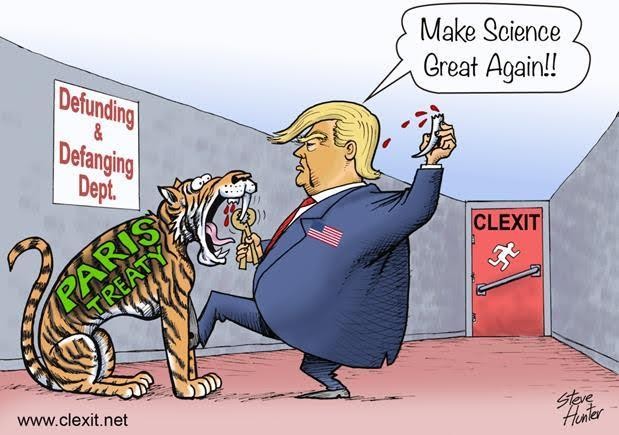 The Clexit Coalition has pledged to assist any government or politician seeking to exit the Paris Agreement and to curb the wasteful and destructive UN/IPCC.

The Secretary of Clexit (Climate Exit Coalition), Mr Viv Forbes of Australia, said that Clexit could call on over 190 well-qualified climate realists from 26 countries to provide scientific, business, legal and political support and advice.
See: http://clexit.net/wp-content/uploads/2016/07/clexit-members.pdf

Firstly, de-fang the Paris Climate Treaty by refusing to sign it, by ignoring any deals signed by others without a supporting referendum, or by giving notice of formal withdrawal.

The Paris Treaty is now a Toothless Tiger

And fourthly, re-educate – ensure that the climate curriculum in schools and universities is based on good science and real evidence, and not political agenda.

These four actions – de-fang, de-fund, de-staff and re-educate will cool the climate hysteria, with huge and immediate benefits for tax payers, jobs, industries and energy costs and security. It will also end the doomsday horror stories terrifying our young people. And if there is additional carbon dioxide in the air, our Earth will be greener and produce more food.

Brexit and the Trump revolution are just the start. Have a listen to what happened in Australian Parliamentary offices recently:
https://www.youtube.com/watch?v=wwQ6BiqeBcg&feature=youtu.be
(Both Senator Roberts of Australia and Tim Ball of Canada are Founding Members of Clexit).

The same sceptical questions are being asked in France, Poland, Hungary, UK, Canada, Russia and Germany; even at the Climate Carnival in Marrakesh, Morocco: http://clexit.net/2016/11/17/marrakech-papers-by-clexit-members/