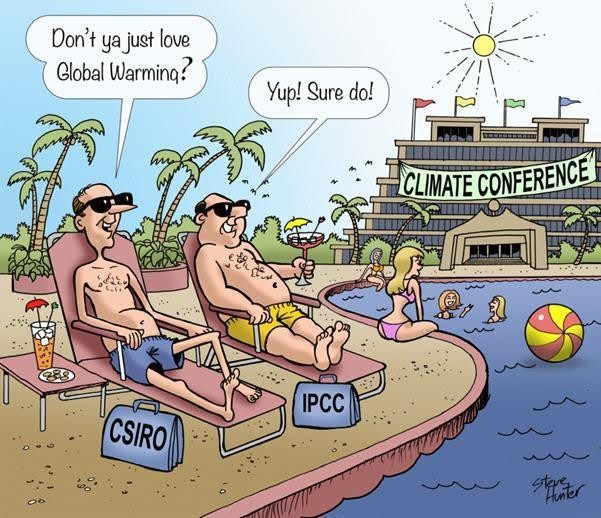 For at least 21 years now, UN/IPCC has been ring-master to a troupe of thousands. They perform at massive annual conferences held in exotic locations, serviced by top hotels and airlines, and funded largely, directly or indirectly, by reluctant tax payers. An estimated 45,000 attendees, including 114 from the Australian government, achieved nothing useful at Copenhagen and just more green tape in Paris.

Each of these climate-fests is preceded by numerous meetings of bureaucrats drafting and redrafting their wish lists.

Now the UN Climateer-in-Chief, Ban Ki Moon, has jetted into the G20 summit in China to claim climate victory over climate sceptics:
http://www.straitstimes.com/world/united-states/un-chief-ban-ki-moon-says-climate-change-scepticism-is-over

Is there no end to his energy-wasting climate tourism? If they believe the science is settled, no more conferences are needed.

These hypocrites lecture “pay-your-own-way-people” like us on energy conservation. Let’s see them lead by example and do their chatting and scheming on the internet at their own cost.

The 23-nation Clexit Coalition aims to stop all such tax-funded climate tourism. This will be discussed this week in London, at a conference where all costs are being met by the organisers and attendees:
https://geoethic.com/london-conference-2016/